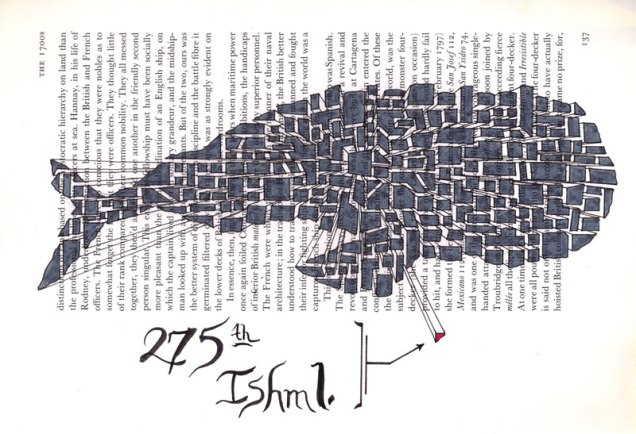 In the very heart of Moby-Dick, Melville dedicates three chapters to artistic representations of whales, with decreasing levels of scorn for the accuracy thereof. He rates them “monstrous,” “less erroneous,” and “true” and then holds forth briefly on artifacts of scrimshaw and the like created by people who actually hunted whales rather than merely painting them based on hearsay.

There is, of course, another type of art — art that is willfully not realistically representative but that nevertheless evokes, expands, and delights. It is this variety of art that Matt Kish creates. Quick to shrug off the title “artist,” Matt has nevertheless begun to accrue a sort of niche fame for his current ongoing project, in which he creates a piece of art a day by illustrating an excerpt from a page a day of Moby-Dick. As he meekly put it in his first blog post about the project on August 6, 2009:

Because I honestly consider Moby-Dick to be the greatest novel ever written, I am now going to create one illustration for every single one of the 552 pages in the Signet Classic paperback edition. I’l try to do one a day, but we’ll see.

A few days later, he landed his first brief interview. By December, he had landed another interview and been invited to be a guest illustrator at quotizzle.com, and he closed the year on the news that one of his illustrations had been the inspiration for a poem at The Storialist. So far this year, he has been interviewed for a couple of German web sites, had his portrait painted by another interviewer (!), and begun making standing-room-only appearances to display his work in Ohio and New York. He fits this all in, of course, around a day job and a schedule of creating a piece of art a day, some of it meticulously detailed and clearly a labor of love and time.

When I found his site a few weeks ago, I immediately flipped back through all the pieces he had done to date, and I’ve been keeping up with great interest ever since. You can imagine how thrilled I was when he agreed to write for Infinite Zombies. Please do yourself a favor and check out his site. I think the perspective he brings — not only that of a great admirer of Melville’s book but that of someone who has paid particular detailed, visual attention to it — will be a great addition to the discussion.