And now we come to it. My first whale. I suppose, for good or ill, I have never outgrown some of my childhood. Even now, at the decrepit age of 41 (!) I am still fascinated by monsters. More specifically, drawings of monsters. Monster art. Anything visual that’s monster related. As I’ve grown older, my tastes have broadened quite a bit and now it takes far more than a simple Godzilla film or drug store comic book to thrill my eye. Still, for me, it’s generally still all about the monsters, and I mean that in the simplest, purest, truest, and most genuine way.

I think that the idea of monsters is still a part, at least, of what draws many of us to Moby-Dick. Certainly the novel is far more complex, yes, but at its heart, the duel of whale and man, Ahab and Moby Dick, is a part of what starts our hearts pounding and our minds racing. So for me, an aficionado of the leviathans of air, land and sea, the prospect of embarking on an illustration project where I would be able to draw monster after monster after monster was one I found almost irresistible.

Once again, I knew I didn’t want to do the expected. There have already been enough staggeringly brilliant artists such as Rockwell Kent and Barry Moser, to name just two, who have lent a soberly powerful realism to this yarn of men and monsters. To me, the fact that these artists were able to depict the whales, men and ships of the story in much the way as they actually appear in reality while still creating thrilling and fabulous images is nothing short of miraculous. I have very real doubts about my ability to depict anything realistically, and on the few occasions when I have tried to do so, the results have been dull at best and positively banal at worst.

This freed me to cut loose the moorings and let my mind explode. I could draw any whale in any medium any way that I wanted. The mythical and Biblical underpinnings of the novel were enough, I thought, to give me some credibility in sailing the seas of fable and fantasy to dredge up these ideas. So again, a lifetime of comic books, videogames, fantasy art, cartoons, science fiction and colored pencils would swirl together and from that alchemical brew provide a bestiary I hoped would thrill me to the end of my days. The excitement was growing. My first whale!

The line I chose was from page 30 of the Signet Classics paperback edition, and I specifically looked for this opportunity so that I could practice a bit before tackling Moby Dick himself. This line would give me an opportunity to start working out some of my ideas and building my bestiary of leviathans. The line comes as Ishmael lounges in the Spouter Inn eating breakfast and staring about him at the panoply of seasoned salts, sailors and harpooneers. He, like me, seems to marvel at these men and the deeds that they are capable of, curiously contrasted by their almost meek silence at dining in the company of strangers. Ishmael remarks “Yes, here were a set of sea-dogs, many of whom without the slightest bashfulness had boarded great whales on the high seas—entire strangers to them—and duelled them dead without winking…” That was more than enough to fire my imagination. The bravery, the martial spirit in that line! These men had “boarded great whales on the high seas!” I’ve had a hard time stepping out of a secured canoe onto a pebbly but very stable shore, so I can’t imagine the skill and dexterity it took to “board” a great whale writhing in its death throes on the crashing waves! And then these men had “duelled them dead without winking.” Again, the courage! Or insanity? Probably both, but isn’t that paradox almost always a quality of the best heroes, from Gilgamesh to Theseus to O.M.A.C.? I liked also how that line alludes to the honor and dignity of whaling. These sea battles were not murder, they were duels. There were rules to be followed. Codes of conduct to be honored. The whale was a terrifying and murderous foe, but one to be treated with respect and dignity. 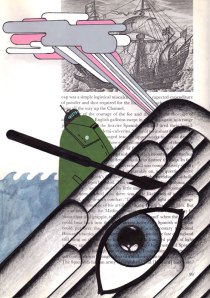 With all that in mind, the image I finally depicted leapt to mind almost immediately. That giant, rolling, baleful eye, preposterously bigger than the harpooneer himself. I wanted the harpoon to look like the death dealer that I knew it to be, so rather than attempt something realistic I remembered the scalpels we used to eviscerate the fetal pigs I studied in biology. The harpoon became a smoldering black scalpel poised menacingly over that fragile eye. The injury to the eye motif! The harpooneer I was especially fond of, towering implacably on the head of the leviathan, unbowed, unmoving, frozen in that single moment of time before delivering the deathblow. Careful viewers will notice the pink froth from the whale’s spout, showing the beast to be already gravely wounded and fighting to its last breath.

Sometimes, with these Moby-Dick illustrations, there are layers of meaning. Hidden symbols, personal and otherwise. But sometimes, it’s just men and monsters, sailors and whales. And those are often the most fun to make. I hope you like this one as much as I do.