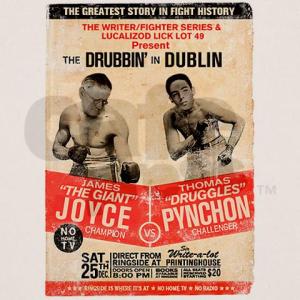 Paul here.  Daryl gave me the go-ahead to throw a post of my own here (and since no one else was writing about it…here goes).

I’m going to start this post with this admission: Not only have I not read Gravity’s Rainbow before, I don’t even know what it’s about (aside from what I have read for this week).  I haven’t read any commentary or criticism, I didn’t even read the back cover.  So I’m flying blind.

I mention that because I’m going to talk about Ulysses; however, I have literally no idea how this plays out in the rest of the story, or if it plays out at all.  I’m also going to refrain from looking up secondary sources for this post because I don’t want to create be an academic treatise, it’s more of a reader’s casual observations.

Ulysses is probably the most influential 20th century novel (and you can read plenty about Ulysses on this site too).  This is especially true for “modern” writers looking to push the envelope–of which it seems clear Pynchon is one.  Stylistically, I don’t think Gravity’s Rainbow could have existed if Ulysses hadn’t been published.  But at the same time, it’s not like Pynchon is mapping Gravity’s Rainbow to Ulysses (right?  I didn’t actually count chapters or anything.)

Ulysses opens with the famous words, “Stately plump Buck Mulligan came from the stairhead bearing a bowl of lather on which a mirror and a razor lay crossed.”

Gravity’s Rainbow opens with an equally impressive (although admittedly unrelated to Ulysses) opening salvo: “A screaming comes across the sky.”  The very beginning of Gravity’s Rainbow has nothing to do with Ulysses.  Ulysses, a book about one day in the life of two men pales in scope when compared to Gravity’s Rainbow, a book (so far) about German bombs falling on England in World War II and the members of the possibly secret organizations that are tracking the bombs (or something–bear with me if it eventually becomes about fairies and rainbows).

So, the opening of the books are quite different.  The first three pages of GR are about an evacuation (I’m not going to go in that direction about evacuation, even if Joyce did) from the screaming across the sky.  But then Pynchon introduces us to the first two men in the story: Captain Geoffrey “Pirate’ Prentice and Teddy Bloat.

As Ulysses opens Buck Mulligan and Stephen Dedalus wake up after a night of drinking.  And so do Pirate and Teddy.  Indeed, Teddy falls off of a balcony in a drunken sleep; Pirate gets a cot under him to break his fall just in time.  Then Pirate proceeds up to the roof and we get a little Ulysses-lite.

We have established Buck Mulligan on the roof.  His appearance: “A yellow dressinggown, ungirdled, was sustained behind him on the mild morning air” and his action: “he peered down the dark winding stairs.”

Pynchon is more verbose than Joyce (at least this chapter of Joyce) but we can see that Pirate is in a similar structure with similar dress:

Then he threads himself into a wool robe he wears inside out so as to keep his cigarette pocket hidden, not that this works too well, and circling the warm bodies of friends makes his way to French windows, slides outside into the cold, groans as it hits the fillings in his teeth, climbs a spiral ladder ringing to the roof garden and stands for a bit, watching the river.

Of course, instead of the open razor that Mulligan carries, Pirate is carrying bananas (I won’t speculate about the meaning of potential violence inherent in the razor vs the utterly non violent nature of the banana or how it compares to a novel that is ultimately about war and death).

Obviously very different things are happening in the two books: Buck Mulligan and Stephen Dedalus discuss death on the tower, while Pirate is by himself watching as death streams across the sky.  But when both parties return down the spiral staircase it is time for breakfast.  Mulligan and Dedalus eat sugared toast while Pirate and his crew eat what sounds like a rather delicious broiled banana sandwich.  And from there things diverge quite drastically.

I don’t want to belabor the point or look for similarities that aren’t there, I was simply struck by these coincidences in the opening of these two apparently unrelated books.  However, just to prove to myself I was on to something, I checked online to see if anyone had made anything of this.  Evidently there are ample connections between the two books, but there’s one article in particular that I like to think confirms my suspicions:  McCarron, William. “The Openings of Ulysses and Gravity’s Rainbow.” Conference of College Teachers of English of Texas 53 (1988): 34-41.  Sadly it is not online anywhere that I can find.

What’s the point of this?  Well, none really, but it might be fun to keep an eye out for more allusions to Joyce while enjoying the book.

Oh and that picture above, it’s from a T-shirt that you can buy here.