This week’s reading brings us up to page 81, and boy is there a lot of stuff one could chomp into here — behaviorism, reliability of the narrator, stories within stories, the difference between aloneness and loneliness, what we mean by sentience, fun with names, comparison with certain other authors to whom I plan largely not to compare Levin during this read, and a fair few others. But what I’m going to focus on for my first post proper about Bubblegum is Levin’s use of marks on the page.

First, I want to look back at Levin’s first novel, The Instructions, in which he in several places uses words to form pictures. These word pictures grow more and more elaborate as the book goes on, but here’s a simple one from the first half of the book: 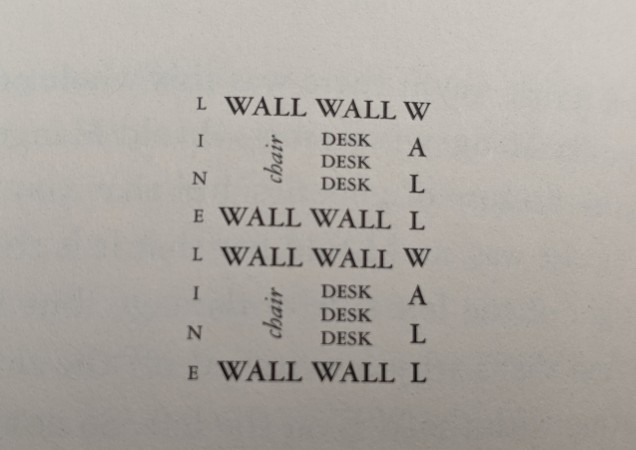 I mention this to establish that Levin seems to be willing to use words and letters to signify more than the simple words that stream along the mental ticker tape that plays in our heads when we read. In this picture, Levin uses words to create physical models of what they represent rather than merely abstract symbols that our brains translate for us into their physical referents.

I have not yet run into anything quite so concrete in Bubblegum, but having seen this sort of concrete poetry in Levin’s past work, I was primed to think about Levin’s use of marks on the page in Bubblegum as more than the simple utility dots and strokes that I think we usually take them for.

The first that really caught my eye occurs on page 4: 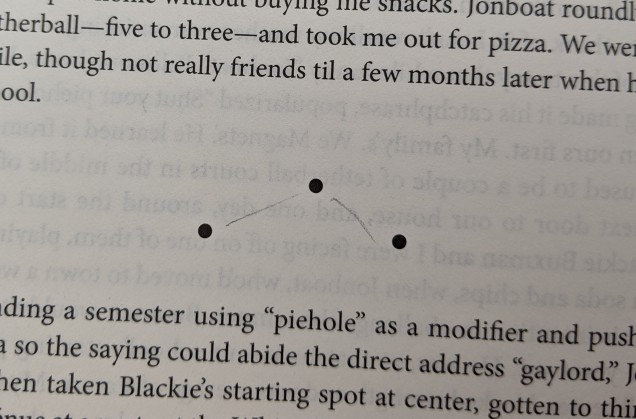 We see here three dots that, if connected, would form an isosceles triangle, right? I didn’t think so. The rightmost dot looked just a little closer to the top dot than the leftmost did. I didn’t measure the distances initially, but I marked the dots in my book to remind me to come back to them later. I wondered if the configuration of the dots might change somehow as the book went on and be imbued thus with some sort of meaning. So far, they seem to’ve kept this same configuration. I did wind up breaking out a ruler and measuring the distances later, and indeed the rightmost dot is closer to the top dot than the leftmost dot is, by just a little bit. But what does it mean? I have no idea. Belt on page 52 describes his Cure as a single-legged triped. Does this little three-dot section-divider represent something like the points Blank’s “peds” would make when it stands on all three of its limbs? Whether or not that’s the idea, why the subtle difference in distance?

The next close attention to marks in the book is the argument between Belt and Jonboat about commas and hyphens in the phrase they plan to ink onto tee-shirts:

I, however, was of the opinion that, absent “gaylord,” the comma should be restored to its original position between “piehole” and “cakeface,” whereas Jonboat claimed restoring it would ruin the shirt. He said that, first of all, with a comma before “cakeface,” the shirt would have to be considered “officially punctuated,” which would require a period be placed after “cakeface,” not to mention a colon, if not another comma, after “Jonboat Say,” and quotation marks around the catchphrase itself, i.e….

This, believed Jonboat, was more punctuation than a t-shirt could abide… But I did suggest that a hyphen be placed between “piehole” and “cakeface”… Jonboat wasn’t sure. He thought a  hyphen might suggest “official punctuation,” giving rise to the problem that ditching the comma had already solved. Then again, it might not. A hyphen might be more like a spelling thing — more like an apostrophe.

I’ve cut out a fair bit here, and the two boys talk about it further later. Later still, on page 50, Belt explains that he has taken some liberties in his reproduction of conversations he has had with Lotta and Chad-Kyle:

So, Belt via Levin is paying special attention to how he puts things on the page, to how the arrangement of the marks on the page sort of regulates the flow of the ticker tape of meaning. The how of the saying is as important as the why to Belt, the way you hear it in your own private head as important as what what you hear means.

Belt’s mention here of pronouns takes me back to page 3, when a word in the second sentence caught my attention: “The piehole thats shutting he’d demand was rarely mine, though.” We’re accustomed to using “whose” as an inanimate possessive pronoun, or using something twisted like “The piehole of which he spoke of the shutting of was rarely mine, though.” We don’t know it yet when we get to this 23rd word of the novel, but there’s a lot of meaning in this weird “thats.” It’s as if Belt is sort of promoting the inanimate by giving them a real pronoun of their own, calling attention to the lack of one and thus, perhaps, to their sort of second-class status. When later we learn that Belt not only talks to inanimate objects but pities them, tries to help them — in short that he treats them as if they are sentient — his use of this odd new possessive pronoun makes pretty good sense.

The use of a whole new pronoun is a bit of a digression from the use of individual utility marks, which I’ll return to now.

On page 38, Levin introduces the || and | marks as substitutes for double and single quotation marks when inans speak to Belt. It makes a certain amount of sense. Belt tells us that they communicate directly into his brain. Why not indicate this via weird punctuation marks? Well, sure, I guess. But there are plenty of books in which people think to themselves (direct in-brain communication) and in which that thinking is written using regular old quotation marks or italics. I suppose there aren’t as many books in which inanimate objects communicate directly in-brain via something called a gate, though. Maybe that merits the use of a different mark. When I first ran across these marks on page 38, I jotted in the margin the word “caesura,” which is the name given to a big pause in the middle of a line of poetry. When marking the rhythm of poetry, you use the || to indicate where a caesura falls. Maybe Belt via Levin chose this mark to indicate some sort of mental pause bookending the injection of the inans’ communication into Belt’s brain. Or maybe he just wanted to use a different set of marks to set them off more starkly.

The final mark I’ll mention is one that’s missing. Belt’s book No Please Don’t should have a comma after “No.” I’m not just being picky about grammar myself here. Belt has demonstrated from as far back as middle school that he is a person who thinks about correct punctuation and punctuation’s influence on how you’d speak a phrase. He is also not stingy with commas on the whole. This title demands a pause — a caesura — after its “No.” It’s hard to imagine that the Belt who argued with Jonboat over commas and hyphens or the Belt who deliberated over the rhythm he used to relate Lotta’s telling of a story would omit the comma here. But he does.

While I don’t have a clear thesis about this stuff, I think there is an assumption I can acknowledge: that marks on the page that we don’t think of as signifiers themselves are  easy to not pay much attention to or assign much value to. They are utilitarian in that they help us navigate what we’re reading, offering pacing, rhythm, boundaries, and so on. But they are not, in general, the point.

To stretch a bit, I’ll suggest that the same is true of things like book jackets, which draw you in but then become largely an annoyance. My Bubblegum jacket sits limply now on a pile of neglected books on my nightstand, as I don’t want to have to fool with it as I lug the book around from room to room. A couple of people mentioned in comments here wondering if a faint whiff of bubblegum smell was real or imagined. Levin confirmed in a conversation on the podcast The Great Concavity that the jacket had been made with a heat-activated scent. The slight warmth of your hands on the jacket causes the jacket to smell faintly of bubblegum (the warmth of your skin in the world of Bubblegum also happens to keep cures alive). It’s kind of marvelous. And it also, to me, works as sort of a functional rhyme with some of what’s happening with the various marks I’ve made note of here. ||Attend more closely,|| these things seem to say to me, ||things that do not usually garner much attention are more significant than you think.||

On page 44, Belt says a fair bit about the phenomenon of his destruction of the Feathers swingset:

On pages 21 – 24, Belt mediates on bubblegum, its function and its meaning.

This feels pretty familiar to me. I have no tidy thesis here, but part of me wants to make an airtight case that calling our attention to easily-skipped-over marks on the page causes us to treat these marks, in a way, as Belt treats inans — giving them attention, engaging with them as items worth engaging with, and that in doing so, Levin is writing a book whose form at times sort of mirrors the content. Pope played with this in his “Essay on Criticism“, using a long slow Alexandrine (twelve syllables, alternating unstressed and stressed, with a caesura in the middle) to demonstrate how an Alexandrine could be long and slow:

A needless Alexandrine ends the song,
That, like a wounded snake, drags its slow length along.

Pope writes several similar lines in which the content demonstrates the precept he’s sharing (soft, whispery sounds in a line about the blowing wind, for example). Maybe Levin is doing something similar, giving marks on the page we would usually skim over more significance, as Belt grants inans and cures more significance and even a sort of sentience.

Or maybe he’s just playing around. Maybe I’m looking for significance where there is none. Still, it’s fun. Whether there’s meaning in these things or not, the possibility of meaning, the experience of reading a book that allows me to try to tease these sorts of things out, has so far been rewarding.

5 thoughts on “Marks and Meaning”